I do not write fantasy.  I repeat: I DO NOT WRITE FANTASY.  And yet, when I saw the picture below, a visual writing prompt from the writing circle to which I belong, a fantasy story popped into my head.  Go figure.

Fortunately, I didn’t have to ‘world-build’ because I used good ole Earth as is for my setting.  My main character was also somewhat created for me.  His story is all mine though.  Enjoy! 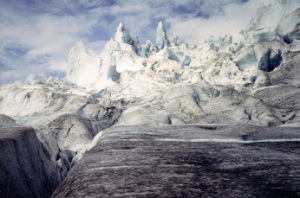 Yeti, Sasquatch, Abominable Snowman, Bigfoot, Offspring of Fallen Angels, Marked of Cain–all the stupid names Humans have attached to his kind. Their own unfounded fears put fangs in his mouth and claws on his hands. Their so-called encounters were nothing more than staged hoaxes. Occasionally the drunken fools would tangle with an ape or bear and blame it on him. Him, the last of his kind for at least five hundred years.

Cryzzk cannot keep the angry thoughts from tormenting his mind as he walks through the frozen land to which he has exiled himself. No longer can he tolerate foolish Humans. They were never really a threat to anyone but themselves. In their ignorance and superiority, they denied what his people had to offer. Gifts of healing and knowledge on how to preserve the Earth could have been theirs.

He continues to trudge through the waist-deep snow, never looking back, always pressing forward. The drifts yield to his strength like dust before a breath of wind. He drags his fingertips, the only part of him devoid of fur. Ten even trails flank the ruts made by his powerful legs.

“Let them figure that one out,” he says to hear the sound of his own voice in a land free from the pollution of noise.

He doesn’t break stride when he reaches the slushy river, plowing through to the other side. Ice and water are shaken from his fur as he keeps on walking. The elements are unable to penetrate the many layers. Cryzzk is warm despite the freezing temperature. Loneliness is the only thing he cannot keep at bay. It penetrates his very being the way the icy winds burn his lungs, an indication that he is getting older. It was his choice to remain alone after Moerge died. He still misses his mate, knowing she would scorn his solitary life.

“It is our responsibility, Cryzzk, to ensure the Earth goes on. Keep reaching out to Humans. One day they will accept us and our gifts.”

It was Moerge’s mantra until the day she died from mercury poisoning. Cryzzk blames Humans. It is why he must continue his journey alone.