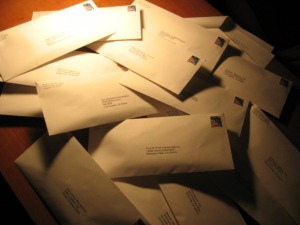 I don’t know about you, but the idea of querying an agent terrifies me. I have two opinions of this process based on various articles I’ve read.

One: As long as Starbuck’s doesn’t mess up the coffee order for the assistant to your chosen agent, your manuscript might have a chance of landing in said agent’s hands.

Translation: As long as everyone is having a good day, your manuscript might be smiled upon.

Two: Agents are fearsome gatekeepers to the world of fulfilled dreams, and I’m standing outside the gate.

That one is pretty clear.

Today I’m stocking my Writing Toolbox with a blog post from Writers in the Storm guest blogger, Julie Glover. Her post, “Are You Ready to Query,” posed questions to me that I hadn’t seriously considered before. What I had been doing is letting the answers jumble around my brain without pinning them down because I felt foolish about them. Now I think I may have been on to something.

Admittedly, I need to perfect my answer to question number one. Yes, I know what my story is about, but do I communicate that well?

To questions number two and three, I have a combined answer. I used to play a game where I fantasized about what critics would say regarding my brilliant novel. It went something like this:

If Wally Lamb and Billie Letts had a child and Isabelle Allende was her nanny, that author would be HL Gibson.

Grandiose, isn’t it? And yet, I believe this game answers the questions about writing voice and comparative titles. I consider the above-mentioned authors to be some of the best storytellers on Earth, and this is the role I want to achieve with my writing. So now I have published authors and titles to which I can compare myself and my novel.

As for voice, it’s all about the storytelling for me. My style is easy and familiar. It reads like the voice of an older relative relating family tales and history, the stories you grew up listening to at every family get together, and the ones you now find yourself telling the next generation.

As for question four, I have feedback from several beta readers, and I have completed two rounds of edits. There are beta readers waiting in the wings to assist me after I complete round three edits. A daunting process for sure, but after reading Ms. Glover’s post, I’m encouraged that I’m on the right track.