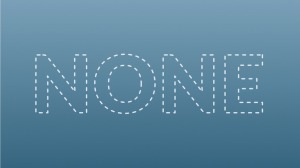 In an effort to stave off the dumbing down of the English language, today’s The Weight of Words focuses on the versatile word none.

None of the cake was eaten. (Cake is singular, so use a singular verb.)

When writing your sentence, remember there is an implied noun that answers the question, “None of what?” Again, if that noun is singular, none requires a singular verb. If that noun is plural, it is up to you as the writer and the sense you are trying to convey in your sentence that determines whether or not none requires a singular verb or a plural verb.

Somewhere along the way, the myth that none is solely singular appeared. Not only is this incorrect based on what I presented above, but it’s up to you, dear writer, to decide if your context is singular or plural. Now you have the information required to defend your choice.