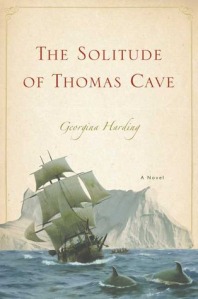 The Solitude of Thomas Cave by Georgina Harding is one of those novels that brilliantly breaks the rules of writing.  You know, all those pesky rules about writing such as use only one POV, don’t head hop, don’t bookend your novel with a prologue or epilogue, and don’t use flashbacks.  The fact that the novel was published as recently as 2007 restores my faith in the industry.  With that being said, The Solitude of Thomas Cave is one of the best examples of literary fiction I’ve ever read.  It’s right up there with Poison by Susan Fromberg Schaeffer and Night Train to Lisbon by Pascal Mercier.

The novel opens with the narrative of Thomas Goodlard, a sailing companion of Thomas Cave on the whaling ship, the Heartsease.  Young Goodlard relays the details of how Thomas Cave came to spend an entire year by himself on an Arctic island.  A rash bet between shipmates is sure to be the end of Cave, yet there is something more to his desire to stay alone in the frozen hell.

At this point, the novel slips into the POV of third person omniscient, describing Cave’s experiences.  Harding writes with clarity sharper than the frigid Arctic air, and she sucks the reader in with chilling description regarding the conditions in which Cave must survive.

Part of Cave’s solitude involves reflection on his relationship with the beautiful daughter of a shoemaker.  It’s a ghost story, really, and one that haunts Cave’s self-imposed exile to the point that he cannot separate dreams from reality.  He does, however, manage to keep his personal history out of the log he keeps for the Captain of the Heartsease, and we are treated to passages from said diary.  By having her protagonist hide some of the truth of his isolation, Harding supplies her readers with interesting details of Cave’s life that his fellow characters never know, and the reader is drawn deeper into his nightmare.

The history surrounding whaling practices is harsh, often brutal, to read.  It’s not a profession with which I am in agreement; Harding doesn’t back down from the gory truth.  It also isn’t long before one realizes Cave is eating whatever is necessary to survive.  As rough as conditions on a whaling ship might be, by the end of the novel they seem like the lap of luxury compared to Cave’s meager existence.

Harding surprises by not ending the book with what I assumed would be the natural conclusion.  At first I feared she would ramble on, simply trying to fulfill a word count.  But it is in this final section that she reveals a subtle yet powerful message.  She also reverts back to Thomas Goodlard’s POV and finishes the book with the truth that solitude isn’t just something we experience:  it is something we can carry inside because of our experiences.