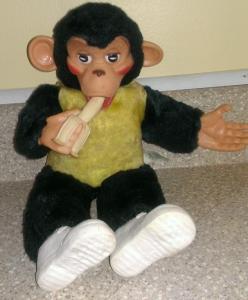 Ava Maria Tedesco is a tender-hearted girl of thirteen. While she knows that stuffed animals aren’t real, she can’t quite help but extend to them the same compassion she showers on animals, people in need of prayer, sometimes her siblings, and always her parents, Grandma Josephine, and Sister Mary Agnes. One of Ava’s favorite stuffed animals is Mr. Monkey. Unfortunately for Ava, her older sister, Katherine, knows this. Katherine only meant to kidnap Mr. Monkey for a short time to torment her younger sister, but when she hides the rubber-face stuffed toy in their mother’s dryer, all does not end well.

I based Ava Maria’s favorite stuffed toy on one I had as a child. In fact, Freddie is still packed away in my basement with all my other childhood stuffed toys even as I type. I don’t know where I obtained Freddie or how that came to be his name. I just remember being fascinated by his rubbery face, hands (one of which holds a banana), and little white shoes. Even before I can remember, one of Freddie’s shoes somehow became slightly detached from his hairy legs and had to be safety pinned in place.

When I researched the doll for my novel, The Tedescos, I came across pictures of the one I had as well as one with the word Zip on the front of his yellow shirt. The Zip doll was the representation of the actual chimpanzee, Zippy, who was a television star in the 1950s. Zippy had been discovered by Bob “Buffalo Bob” Smith of Howdy Doody fame, and the chimp appeared on the show. Zippy also appeared on The Ed Sullivan Show, Captain Kangaroo, Gary Moore Show, and Jackie Gleason Show.

The Ruston Company made the Zip stuffed doll in response to Zippy’s popularity on Howdy Doody. Howdy Doody ran from 1947 until 1960, and while I have yet to find documentation supporting this fact, either The Rushton Company continued to produce the popular stuffed doll long into the 1970s (my childhood) or children took extremely good care of their toys. Another possibility allowing the doll to make it into the 1970s is what I call ‘the knock-off’ factor in which Zip lookalikes, such as the one I have, were produced well beyond the demise of the Howdy Doody show. Columbia appears on the tag of some of these dolls identifying them as made by another toy manufacturer.

My version of the rubber-faced monkey doll is apparently known as Mr. Bim, and he may or may not be holding a banana, have red suspenders or black pompom buttons, and have yellow or white fur representing a shirt. In 1984, Dakin produced an updated version of the Zip doll.

In addition to the stuffed monkey dolls I’ve described above, there are a whole host of monkeys in other colors of fur, with or without hats, some with different facial configurations, and more. So while my Freddie and Ava Maria’s Mr. Monkey might not be original Zip dolls, they are no less loved.