The following piece of flash fiction was written based on the visual writing prompt below.  It wasn’t the original idea that came to mind, but it is the one with which I was most pleased.  I have been writing flash fiction lately for a writing circle contest.  I hope you enjoy my latest installment. 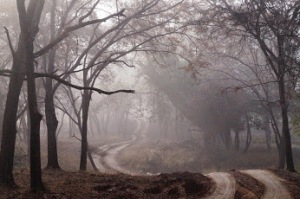 Josiah watched the soldier march up the long road snaking across his property. Fog shrouded the young man, but his uniform and unique helmet marked him for a Brit. When he reached the front porch, he stopped and saluted smartly.

“Excuse me, sir, does Jenny Coates live here?” the young man asked in a Cockney accent.

The soldier chewed the inside of his mouth, narrowed his eyes.

“All right then. I’ll ask at the next house.”

He disappeared around the side of the house as the screened door creaked open. Josiah’s wife, Kathleen, stepped out carrying two cups of coffee. She handed one to her husband and scrutinized his pale face.

“You saw the soldier again, didn’t you?”

“Why do you think he keeps coming here?”

“I suppose his ghost is attached to that old Lee Enfield I bought for my collection.”

“Why don’t you sell it at the next gun show?”

“I can’t. I have to find out his name and why he’s looking for this Jenny.”

Kathleen smiled into her cup. She took a sip and asked, “You aren’t afraid of him, are you?”

“A boy who’s obviously been dead since World War I.”

Josiah sighed and turned up the collar of his Carhartt against the November chill. Kathleen sat beside him on the glider, setting it in motion.

“You believe you can bring some peace to this boy, don’t you?” she asked.

“If not him, then perhaps me.”

“It won’t bring our son back, Josiah. Tommy’s sacrifice in Afghanistan–”

“Look, Kath; if Tommy is out there wandering, his ghost attached to some piece of gear, wouldn’t you want people to do right by him?”

“Let’s start with the initials R.W. carved into the stock, okay? We can trace it back through dealers next.”