November 12, 2014 By hlgibsonauthor in Books, Movies & Music Leave a comment 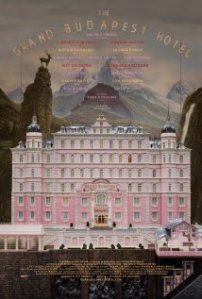 I admit I am not a movie buff. I don’t know directors or writers, I don’t leave comments on cinematography or storyline on IMDB, and I don’t watch the Oscars. Most of the movies I watch are because my son or husband wanted to see them. In fact, I can’t remember the last time I saw a movie at the theater. I wait until they come out on DVD and borrow them from the library.

I’m not telling you this because I’m criticizing movies or film buffs in any way. Rather, it’s so I don’t embarrass myself when I try to review The Grand Budapest Hotel.

My faith in Ralph Fiennes as an actor was reaffirmed in this movie. He hadn’t impressed me lately, not that I believe for a minute that Mr. Fiennes lives to do so. In Skyfall, his character was stodgy at best, his acting flat. As Gustave H, I fell in love with him again.  Although his character is scandalous in every way possible, you can’t help but be charmed by him.

There are plenty of other well-known actors and actresses in the movie as well.  Whether in main roles or bit parts, they all do a wonderful job portraying their character.

This movie was laugh-out-loud funny, macabre, melancholy, sweet, and twisted. In my opinion, some of the best lines in film occur in this movie. The CGI used was an old-fashioned technique, I looked this up out of interest, but the effect only adds to the charm of the movie.

I did ask a film-fanatic friend if it was just me or was this movie similar in feel to The Darjeeling Limited and The Life Aquatic with Steve Zissou?  She confirmed my suspicion by pointing out that Wes Anderson directed both.  I had to laugh at myself even though I was kind of proud for noticing.

I’m sure better reviews exist. You wouldn’t have to search very hard to find one. All I know is, when I see a movie I enjoy as much as The Grand Budapest Hotel, I like to share it.