I woke up this morning thinking about the red glass rabbit. The memory must have ridden in on the tail end of a wild night of dreaming because I haven’t thought about her in decades. In my mind, she still holds center court among the animal figurines sitting on my great aunt’s kitchen windowsill in Tennessee.

My great aunt never hesitated to let me play with what I believed were her most treasured possessions. For this reason, I took great care not to break any of the inch and a half tall animals in the collective herd. There was a goose and a deer among the group, but my favorite was the solid red, blown glass rabbit with two miniscule dollops of white glass for eyes. She was perfect. 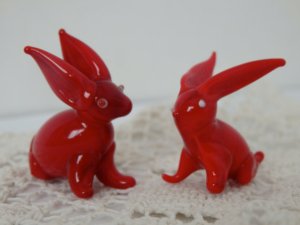 The red glass rabbit starred as the heroine in all my adventures played out on the kitchen table. She forever needed rescued by the other animals led by her boyfriend, the deer. I’m pretty sure I named him Bambi; I don’t recall what I named the rabbit. Every scenario, in which I imprisoned her in a tiny basket, ended with her being declared queen, a title she graciously accepted.

Occasionally, her liberation depended on the assistance of my great aunt’s salt and pepper shakers. There were four of them, two couples of different size, reminiscent of the man on the Cream of Wheat box and Aunt Jemima. These shakers are the type of item labeled Black Americana today and are found in antique stores and probably homes south of the Mason/Dixon line. I could be wrong about that, though.

During one summer visit to my great aunt’s home, I was horrified to discover that since the last year, someone had chipped the ear of the red glass rabbit. My great aunt didn’t seem as upset as I believed she should have been. She said either she, or my great uncle, or her mother probably knocked the rabbit off while washing dishes. My thoughts fluctuated between relief that it wasn’t me who caused the mar and appreciation that the damage could have been so much worse.

My great aunt broke up housekeeping several years ago after my great uncle and her mother passed. She sold the home and large items in Tennessee, bestowed smaller goods upon close friends, packed up the rest, and moved back to Ohio. It was good to have her home. I asked about the salt and pepper shakers because I trusted their size ensured they survived until my adult years. Unfortunately, my great aunt had already given them away.

I never inquired about the red glass rabbit. I knew in my heart the tiny treasure had disappeared long ago. Before I stopped playing with my own collection of animal figurines, the red glass rabbit probably had her ears and toes chipped until she appeared in a sorry state. Or perhaps one tumble into the depths of the empty kitchen sink was one too many, and she had to be discarded.

Does it matter that my great aunt probably doesn’t even remember owning such an item?  Does anyone reading this even care? Who can say? All I know is that somewhere in time, a very talented glassblower created a beautiful red glass rabbit that brought immeasurable joy to a little girl.