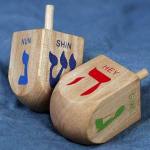 In December of 1927, Claude Willoughby has been left behind in Maryland as his father, sister, and step-mother return to Kentucky for Christmas. The cruel abandonment is Claude’s punishment for disobeying his father’s directive. Sam Feldman comes to Claude’s rescue by inviting him and their friend, John Welles, over for an after-the-fact Hanukkah celebration. After a meal of brisket and latkes, the boys play dreidel with Sam’s mother, Gladys.

Although the game is meant for children, I know quite a few adults, myself included, who get caught up in playing dreidel every Hanukkah. In fact, we have a tradition that last year’s winner must return to defend his or her title the following year.

The Hebrew word sevivon or s’vivon means to turn around. Dreidel is the Yiddish word for a spinning top. All dreidels have four Hebrew letters on them which stand for the saying Nes gadol haya sham, meaning a great miracle occurred there. In Israel, instead of the fourth letter shin, there is a peh which changes the saying to Nes gadol haya po, a great miracle occurred here.

Playing with the dreidel is a traditional Hanukkah game played in Jewish homes all over the world, and rules may vary. Here’s how to play the basic dreidel game:

For non-Jewish players, we came up with a way to remember what do to for each Hebrew letter:

Nun you get none – don’t do anything

Gimme gimmel – you get the entire pot

Shin two in – put two game pieces in the pot