I was looking at my calendar and realized I haven’t read anything written by you or about you since December of last year. Admittedly, I probably wouldn’t have if my reading group facilitator hadn’t chosen The Great Gatsby as the July selection.

So yes, I finally read The Great Gatsby, and I must say a better title would have been Gatsby’s Folly. My critique is probably going to sound quite harsh when I say I didn’t find anything particularly great about the character of Jay Gatsby or the story in general. Certainly nothing new or exciting. While Gatsby is heralded as your most successful novel, it was more of the same themes you wrote about repeatedly in many of your other works.

For this reason, my opinion of your writing hasn’t changed. If you’re interested to know what those opinions are, because we’ve never discussed them in our correspondence, you may read them.  (Under the Influence & F. Scott Fitzgerald – The Short Stories) If your agent and editor were alive today, they should be fired for letting you get away with this. Then again, kudos for convincing them and the public that they were reading new material. Well played, I suppose, but really Scott, you had such potential and could have done better. 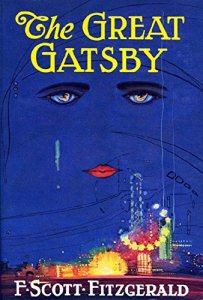 Some minor issues I have with the novel include your pet word problem (in this book it was violent), the ridiculous names you assign your characters, the clichéd racist comments and characters, and your overuse of –ly adverbs. Perhaps the prohibition on –ly adverbs being taught to writers today would surprise you, and we might actually find ourselves on the same side in regard to the issue.

Another way Gatsby is no different from your other works is that right on cue you presented characters that attended Princeton, Yale, or Harvard, played football, were “old money” or “new money,” and pursued the “top girl.” All things you wanted for yourself. Quit writing so much of yourself into your novels and short stories. It comes across like a pathetic, autobiographical cry for help.

To write novels that are supposedly commentaries on the 1920s yet accept no responsibility for the debauchery that took place is imprudent. You weren’t an innocent bystander, Scott. Rather you were a major contributor to the post-war era of exploring new freedoms and sexuality. We both know if you could have obtained the wealth and power that would have made you equal in the minds of those considered “old money,” you would have jumped at the chance headfirst. If we’re to believe you meant your novels as warnings, then I must ask what kind of person doesn’t heed his own advice? A fool, I’d say.

On the upside, you may be pleasantly pleased to know that your unfinished novel, The Last Tycoon, is being made into a series for television. Too little, too late, wouldn’t you say? Still, your name is being kept alive on people’s lips, so at least the fame you always craved is there.

As for the collection of your unpublished short stories, I’d Die for You, I admit that my opinion toward you softened somewhat when I discovered the stories didn’t sell because per Scribner, “Rather than permit changes and sanitizing by his contemporary editors, Fitzgerald preferred to let his work remain unpublished, even at a time when he was in great need of money and review attention.” Finally, you’re standing up for your work and not just trying to turn a quick buck.

But let’s not end on a bitter note, shall we, Scott? I keep reading your work in the hopes that one piece will redeem you in some fashion if for no other reason than to thumb your nose at Ernest who deserves it. Besides, I don’t want to keep feeling sorry for you. I’d like to find a way to extend you some forgiveness for ruining your own career. With that being said, I’m probably going to buy I’d Die for You. I fear you shan’t see a penny from the sale.

All my best to Zelda and Scotty.