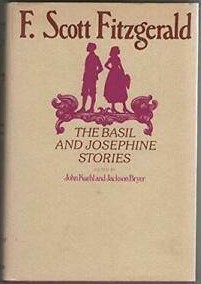 I’m not usually a fan of F. Scott Fitzgerald, and I’ve admitted I have a love/hate relationship with him, which meant I loved to hate him. I felt this way because I did not believe Fitzgerald deserved the acclaim he received, and still receives, for repeatedly producing the same work.

You may read my opinion of the author and his writings here: Under the Influence; Dear Scott, Sincerely, HL; and F. Scott Fitzgerald – The Short Stories.

Recently, I read The Basil and Josephine Stories, a compilation of Fitzgerald’s two previously published series from The Saturday Evening Post, and I honestly enjoyed them. I think they are some of his best writings.

Fitzgerald grabbed my interest by digging deep into the compost pile of this own youth. He transferred specific details and events to fashion Basil’s stories. While I formerly complained that he put too much of himself into his writing, the Basil stories were fresh in that they read like an attempt at self-analyzation, which I found intriguing.

I believe a mature perspective enabled the author to write about the humiliating details while at the same time stepping back and processing them. In doing so, the reader was treated to Basil’s growth and maturity, whereas in Fitzgerald’s own life, one does not see such amazing growth as experienced by his character.

One detail in Basil’s life that shocked me was the absence of his father, who had died in an unspecified manner. I recall reading that Fitzgerald was ashamed of his own father’s lack of success, and I wondered if removing Basil’s father from the stories was a subconscious method of dealing with this shame.

Now, factor in Josephine, a girl who repeatedly brought to mind “Charm is deceitful and beauty fades . . .” She is so shallow and self-absorbed that she never learns or grows throughout her stories until “Emotional Bankruptcy” wherein she is just becoming self-aware. There is more of Fitzgerald written into the character of Josephine than was initially apparent, maybe more than he intended, and she represents a warning of what not to become. Again, look at the author’s own life for evidence.

And she is most definitely a picture of the great lost love of his life, Ginevra King.

My conclusion is that Fitzgerald was crafting his version of the perfect ending to his relationship with Ginevra, a what-could-have-been scenario. I believe this because the author intended for Basil and Josephine to meet when he combined the series at some point.

I know that a book of Basil’s tales was proposed (and discarded for the flimsy reason of not wanting the story to detract from Fitzgerald’s more serious writing, i.e., his novels, in any way) but I’m not sure if the intended meeting between Basil and Josephine was supposed to happen in said book.

Whether as a novel or continuation of the series, I wonder if Fitzgerald began to fear the transparency of the story and/or accept that he could never make it right. The author depended on money earned from the stories to support his and Zelda’s lavish lifestyle between novels. Could the beautiful, troubled Zelda have seen what her wayward husband was attempting to accomplish thus forcing Fitzgerald to abandon the project?

Further, would Fitzgerald have had Basil snub Josephine, a literary comeuppance for Ginevra King, or would he have written a happily-ever-after ending bringing the pair together in a way that would show Ginevra, her father, the rich, and the world in general that a middleclass boy could marry a rich girl and make all her dreams come true? Would love have conquered riches?

We’ll never know, and while I would have liked to read that ending, all I’m left with is speculation. Still, I’m leaning more toward a comeuppance for Ginevra/Josephine because Basil/F. Scott was in the process of outgrowing her. Then again, Fitzgerald’s own lifelong pursuit of wealth and fame may have spelled doom for Basil and Josephine if they, as a couple, failed to overcome their worldly desires as Fitzgerald and Zelda did. Then there is the possibility that Basil would have led Josephine to a higher understanding of true happiness beyond money and reputation.

The whole ball of questions sound like something that would be a fabulous project for a writer of fan fiction, don’t you think?

I’m still itching to vent my usual complaints against Fitzgerald, but I’ll finish by saying that I felt more hope for him after reading The Basil and Josephine Stories. It’s obvious that he was better when writing short stories that built upon certain themes with the intention of having the characters intersect at some point. Perhaps I would like his novels better if he had written them as a collection of short stories. It certainly would have assisted with his inability to focus on longer works because of all he had going on in life.

Unfortunately, my hope for F. Scott Fitzgerald comes too late for an author who showed great potential and squandered much of it.