The Alexander cocktail features in my novel, The Secrets of Dr. John Welles, during the winter of 1927 when John and his two best friends, Claude and Sam, sneak away for a night on the town. Prohibition limits their choice of establishments where they might procure a decent drink, but the young men are looking for a little wild entertainment. Where they end up provides more than they bargained for in quite a few ways. I’ll leave you with that little teaser (I have to save something for the publication of my novel), and provide you with the recipes I found and my experience with the drink.

I don’t keep ingredients on hand for cocktails, so I ventured out with my best friend, Emily, to find a bartender who could make the drink for us. It took us three tries at different restaurants before we found one that had the ingredients to make an Alexander. The drink is old-fashioned, and only one bartender knew what we were talking about.

When you mention an Alexander, the drink that most often comes to mind is the brandy version with white crème de cacao.   Even if you don’t order a Brandy Alexander, this is probably what you will receive.

Add all the ingredients to a cocktail shaker and fill with ice. Shake, and strain into a chilled cocktail glass. Garnish with freshly grated nutmeg.

But let’s tiptoe back a little farther in history to 1910 and Jacob Abraham Grohusko’s book, Jack’s Manual on The Vintage & Production, Care & Handling of Wines, Liquors, etc., which is supposedly the oldest reference to a drink called The Alexander. It sounds lovely and like it might have a bit of kick with the rye whisky.

And let us not forget the 1916 mention in Hugo Ensslin’s book, Recipes for Mixed Drinks, which provides this version of The Alexander.

Shake well in a mixing glass with cracked ice, strain, and serve.

So which drink would John, Claude, and Sam have imbibed during their night on the town? For recipes, I’m following the lead of Gary Regan in his 2011 article, Behind the Drink: The Brandy Alexander, but I’m putting the gin back in the drink as it was originally created. 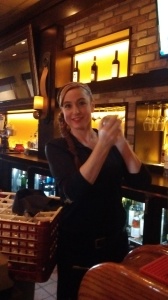 Add all ingredients to a cocktail shaker and fill with ice. Shake, and strain into a chilled cocktail glass. Garnish with freshly grated nutmeg.

Emily and I requested Tanqueray gin, and the lovely bartender, Gretchen, was kind enough to procure heavy cream from the kitchen to make our drink. The restaurant where we dined makes a Brandy Alexander with gelato, but we were striving for authenticity. In our opinion, the drink was delicious. Not too cloying, the flavor of each ingredient blended well, but they also remained well defined. The gin made for a light, crisp drink despite the cream. For the sake of research, we tried the brandy version.

Add all ingredients to a cocktail shaker and fill with ice. Shake, and strain into a chilled cocktail glass. Garnish with freshly grated nutmeg.

The Brandy Alexander was also a delicious cocktail but with a titch more warmth to it. The flavor was richer which we attributed to the brandy. Again, the three ingredients complimented each other without losing their identity and becoming something else entirely.

Traditionally, the drink was served in a cocktail glass, sometimes called a champagne glass, and if you aren’t familiar with it, it’s the saucer style glass on a stem. Today, if you find a restaurant or bar that can make a Brandy Alexander, or the gin version, you’ll receive the cocktail in a martini glass.

For an interesting tidbit, Barry Popik, historian, states the cocktail was invented at Rector’s in New York. According to Mr. Popik, Troy Alexander, the bartender, created the white drink to celebrate Phoebe Snow, the fictional character used in advertising for Delaware, Lackawanna & Western Railroad. The snowy beverage was used to emphasize the fact that the railroad powered its locomotives with anthracite, a clean-burning variety of coal, and was backed up by images of Phoebe Snow in a snow-white dress. The Brandy Alexander was originally known as Alexander #2.

The year is 1927. John Welles and his two best friends, Sam Feldman and Claude Willoughby, are planning a clandestine night on the town. Their destination is a speakeasy hidden on the outskirts of Baltimore, Maryland. For the young medical students, the night will be both thrilling and disastrous.

Before John slips out for the night, he sneaks a dab of his Aunt Prudence’s perfume. This might seem like an extremely feminine thing to do until you become familiar with the scent he chooses to borrow.

One of my favorite subjects researched for my novel, The Secrets of Dr. John Welles, was perfume from the early 1900s. It is how I discovered Tabac Blond. The perfume was perfect for Prudence, a rebel-before-her-time class of woman who smokes, and John, by the simple fact that he’s male. Let me explain.

Tabac Blond was created in 1919 by perfumer and founder of the house of Caron, Ernest Daltroff. The fragrance was intended for women who smoke cigarettes, the symbol of women’s liberation and Parisian chic. What made Tabac Blond appealing were the leathery top notes, usually found in men’s fragrances, blended with a feminine floral bouquet. The added scents of undried (blond) tobacco leaves and vanilla made it desirable to both men and women.

Many reviewers insist upon a decanting of vintage Tabac Blond complaining that the new version doesn’t present as well. I’ll have to take their word for it as I do not own either and have yet to experience them in real life. It is, however, my goal to do both.

If you’re a lover of rich, exotic, glamorous perfume, Tabac Blond may be for you. Don’t let the price tag deter you from your passion. Whether you purchase the new version or a vintage decanting, there will be a small investment. I believe this is testimony to the allure of the fragrance. Be warned, however: wearing Tabac Blond may encourage behavior such as wild dancing, excessive drinking, and dressing like a flapper or F. Scott himself.