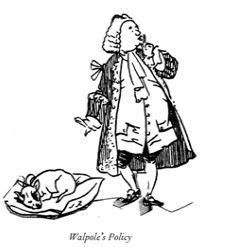 Sister Mary Agnes is a peripheral character in my novel, The Tedescos, but she is one of importance as she lends emotional and spiritual support to the Tedesco Family. In a chapter where she and Shirley Tedesco are at the hospital waiting for a very important outcome, the nun asks Shirley if they should go check on the men meaning Joe and his friends. Shirley replies, “Nah, let sleeping dogs lie.” The phrase means to avoid interfering in a situation that is currently stable, and Shirley certainly didn’t want Joe and company hovering around and mucking things up.

The expression is based on the observation that dogs are often unpredictable when they are startled awake. What started out as a warning about the risk of waking a potentially dangerous animal became metaphorical. The ‘leave well enough alone’ proverb has evolved from the days of Geoffrey Chaucer (“It is nought good a slepyng hound to wake.” – Troilus and Criseyde, circa 1380) and John Heywood (“It is euill waking of the slepyng dog.” – A Dialogue Prouerbes English Tongue, 1546) into more modern versions including ‘if it ain’t broke, don’t fix it.’

There is also a legend that credits 18th century British politician Sir Robert Walpole with the proverb, claiming that it was also his motto. Apparently, the saying does not appear in Walpole’s published writings nor does record exist of him ever saying it. Perhaps he applied some version of the phrase to his political policy, but that’s as far as he and the phrase go although a lovely little cartoon of Sir Robert exists based on the proverb.

As serious as this explanation sounds, Joe and his buddies wouldn’t have responded as a vicious dog would, but their presence still wasn’t required by the ladies.