It’s Cotton Tail in the lead by three lengths…

You probably think today’s blog post has something to do with The Steve Miller Band song of the same title. You know the one where the lead singer (possibly Steve) throws grammar and rhyme to the wind? Actually, today’s blog post is about the phrase give them a run for their money. I used the phrase in my novel, The Tedescos, when describing the success of a peripheral character’s sisters.

Per the Collins dictionary, if you say that someone could give someone else a run for their money, you mean you think they are almost as good as the other person. Per the Macmillan dictionary, it means to compete very well against someone so that it is hard for them to defeat you. And about the phrase, the Urban dictionary offers the definition to challenge someone.

Other websites dealing with phrase origin claim that the saying came from horse racing where one wants a run for his money. This means he wants a horse upon which a bet has been placed to participate in the race. If the horse withdraws from the race after bets are placed, the bettor does not get a run for his money.

Also going along with the horse racing theme, to give someone a run for their money is to give a good race (even if you don’t win) in return for their backing. The definition suggests a challenge, and it is in keeping with the definition presented in the Urban dictionary.

The Oxford English Dictionary agrees that the phrase originated with horse racing and suggests that it could be used in a figurative or extended sense to mean any sort of challenge whether or not money is spent. The OED supplied the earliest usage of the phrase that I could find.

“1874 Slang Dict. 274 To have a run for one’s money is also to have a good determined struggle for anything.”

It has also been suggested that the phrase originated with the British style of hunting where one chases animals with hounds but doesn’t shoot them with guns. (Correct me if I’m wrong, but doesn’t the fox die at the end of these hunts? I’ve watched enough BBC shows to know Brits use guns to kill animals. But I digress.)

Supposedly, if an area of the country wasn’t well stocked with animals to kill, a hunting party had to purchase a fox or stag to set free so they could chase it. The purchase of an animal to hunt added to the already high costs of hunting (good horse, proper riding clothes, and correct footwear) but was considered to be worth it if you had a good run for your money. It all sounds so civil. I wonder if they recycled the fox or stag.

I used the phrase when describing the rate at which my peripheral character’s sisters supplied grandchildren. The sisters gave rabbits (well known to be prolific producers of progeny) a run for their money, and yet the challenge wasn’t really for rabbits.

If you are at all familiar with a grandparent’s desire for grandchildren, you know that more than a simple challenge was presented. The gauntlet was thrown down at the feet of their childless sister. I expanded the definition to show an elevated level of aggression. Wouldn’t it be lovely if this additional aspect was added to the definition of the phrase with the line from my novel cited as the first usage?

Sister Mary Agnes is a peripheral character in my novel, The Tedescos, but she is one of importance as she lends emotional and spiritual support to the Tedesco Family. In a chapter where she and Shirley Tedesco are at the hospital waiting for a very important outcome, the nun asks Shirley if they should go check on the men meaning Joe and his friends. Shirley replies, “Nah, let sleeping dogs lie.” The phrase means to avoid interfering in a situation that is currently stable, and Shirley certainly didn’t want Joe and company hovering around and mucking things up.

The expression is based on the observation that dogs are often unpredictable when they are startled awake. What started out as a warning about the risk of waking a potentially dangerous animal became metaphorical. The ‘leave well enough alone’ proverb has evolved from the days of Geoffrey Chaucer (“It is nought good a slepyng hound to wake.” – Troilus and Criseyde, circa 1380) and John Heywood (“It is euill waking of the slepyng dog.” – A Dialogue Prouerbes English Tongue, 1546) into more modern versions including ‘if it ain’t broke, don’t fix it.’

There is also a legend that credits 18th century British politician Sir Robert Walpole with the proverb, claiming that it was also his motto. Apparently, the saying does not appear in Walpole’s published writings nor does record exist of him ever saying it. Perhaps he applied some version of the phrase to his political policy, but that’s as far as he and the phrase go although a lovely little cartoon of Sir Robert exists based on the proverb.

As serious as this explanation sounds, Joe and his buddies wouldn’t have responded as a vicious dog would, but their presence still wasn’t required by the ladies. 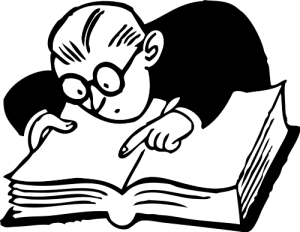 Today’s The Weight of Words is one that made me pause for a moment. Until recently, I never had cause to use the word commenter. My own blog post prompted a quick search on the difference between commenter and commentator. As mentioned in a recent post, Get It Right the First Time…Oops…, I grind my teeth when I post something with a typo or incorrectly used word or phrase.

So, to prevent that from happening to me or anyone else, here is an explanation on the difference and correct usage of commenter vs. commentator. I wasn’t at all surprised to see the definition of commenter has been influenced by social media!