The summer of 1949 was a time of trial and error for Dr. John Welles as he moved forward in his relationship with diner owner, Bea Turner.  Unbeknownst to the doctor, a secret from Bea’s past was about to spill over into his life and drastically change the course of their association.  Already Bea had begun dealing with the misfortune headed their way, but for Dr. Welles, the decisions he made regarding the woman he loves would resurface years later in a most unwelcome way.

On the day after Bea’s bad luck returned, she tried to hurry her patrons along so she could take action to protect herself.  She offered them homemade doughnuts to take along to their jobs at the railyards, but her plan backfired, and the men stayed around drinking their coffee and eating Bea’s delicious baked goods.

The following recipe is the one I had in mind when I wrote the above-mentioned scene.  I love a simple cake doughnut unadorned by glazes, frosting, sprinkles, or any topping, but these can be enjoyed however you choose. 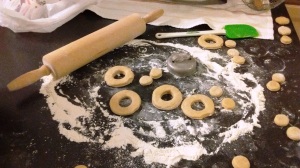 I used a stand mixer for this recipe because the dough is quite heavy and sticky.

Combine the sugar, baking powder, salt, cinnamon, and nutmeg in the bowl of the mixer.  Add the melted butter, eggs, vanilla, and buttermilk.  Mix well until all ingredients are combined.  Add one cup of flour at a time, mixing well between each addition.  The dough should be soft and sticky but firm enough to handle.

Cover the dough with plastic wrap and chill in the refrigerator for one hour.  Remove the chilled dough from the refrigerator and heat about one inch of peanut oil to 360° in a large skillet.  (I used my electric skillet to maintain a constant heat, but you can do this in cast iron with a candy thermometer.)

Work with half the dough and roll it out on a floured surface to about half-inch thickness.  Cut out doughnuts using a doughnut cutter.  (You may also use a biscuit cutter, but you’ll need to improvise for cutting the hole.  A cap from a two-liter pop bottle will do in a pinch.)

Gently place the doughnuts in batches in the hot oil using a slotted spoon or bamboo-handled skimmer, sometimes called a Chinese strainer.  Fry for two to three minutes total turning them over a couple of times as they begin to puff.  When the doughnuts are golden brown, remove them from the hot oil with a slotted spoon and place them on a paper towel or paper bag covered cooling rack.

Warm doughnuts can be tossed in cinnamon sugar, glazed, iced with melted chocolate, and topped with sprinkles.