I’m always saving my pennies to purchase books, so I rarely spend money on seeing movies.  Well, that and the fact that I like to support my local library by checking them out.  With that being said, I still didn’t have to dig in to my Mason jar of book funds thanks to the generosity of my Aunt Deniece.  She bought tickets for me and my son to see In Our Hands.

In Our Hands is the docudrama commemorating the 50th Anniversary of Israel’s Six-Day War.  The movie features historical footage, personal interviews, and professional reenactments celebrating Israel’s 55th Paratroopers involvement in the battle for Jerusalem.

The barely twenty year-old nation of Israel staved off extinction at the hands of surrounding Arab nations determined to wipe Israel off the map.  Israel’s defense forces risked everything, taking on better equipped, larger military forces, for the sake of their homeland.  The unexpected Israeli victory returned the Jews to the Old City of Jerusalem and the Western Wall of the old Temple.  Israelis celebrate Jerusalem Day every year in honor of the sacrifice made in June, 1967.

The title of the docudrama comes from Lt. General Mordechai “Motta” Gur’s famous statement broadcasting that the “The Temple Mount is in our hands!”  The movie does a wonderful job recreating this scene sure to give anyone goosebumps.  Equally miraculous is the scene of Israeli soldiers praying the Shema at the Western Wall.

I highly recommend viewing this amazing, must-see movie.  I’m pretty sure I’m going to have to own this one.

In June of 1920, Prudence Welles Mayfield picked up her nephew, John, to take him to Baltimore to live with her.   The event proved to be a difficult time for her and her sister-in-law, Collie Mercer Welles.

Collie, the midwife who delivered John, raised him from the day he was born when his mother died due to complications from childbirth. She knew the opportunity to live and attend school in Baltimore would be one she could never provide for her youngest child, but the thought of letting him go broke her heart. For Prudence, anxiety came from her insecurities about parenting her nephew when she had absolutely no experience. A dose of guilt also plagued her because she alone knew her intentions weren’t as altruistic as they appeared on the surface.

The two women were never close and barely tolerated each other at best. The only thing they had in common was their deep, abiding love for John. They would never let him see them quarrel over his upbringing. And yet, a gentle tug of war went on just below the surface as they vied for John’s affections. Collie’s last ditch effort to lure her young son back to his family and life on the farm was the simple picnic she sent with Prudence and John for the trip to Baltimore. She hoped her good cooking, the favorite dishes John grew up eating, would produce a change of heart in the boy. Included with the meal was a Mason jar of lemonade, sweet and chilled, the perfect taste memory that would hopefully send John fleeing from his rich aunt and back into Collie’s waiting hug.

My own memories of lemonade began with that made by my Aunt Ann for family picnics. I remember she served it in a large brown crock; such an unusual container for a kid who grew up with Country Time Lemonade drink mix and Tupperware pitchers. I’ll never forget the first time I tasted Aunt Ann’s lemonade, lightly sweet and refreshing, as delicious as any food item on the picnic table at our family gathering.

The following recipe is the one that I had in mind when I wrote the above-mentioned scene. It’s every bit as wonderful as what my Aunt Ann made, and I hope you and your family will enjoy it.

Squeeze enough lemons for one cup of juice and set aside. Cut remaining lemons into slices to float on the lemonade. Mix the sugar and one cup of water in a saucepan over medium heat. Stir until the sugar is dissolved and the mixture is heated through. Do not boil or scorch. Allow the sugar syrup to cool completely.  Raw sugar will produce a darker syrup and a deeper yellow lemonade, but it absolutely will not alter the flavor.

To prepare the lemonade, pour the lemon juice in a large glass bowl or crock, stir in the cooled sugar syrup and the 8 c of water. Float lemon slices on the surface. Stir thoroughly, cover with plastic wrap, and chill for at least an hour in the refrigerator. 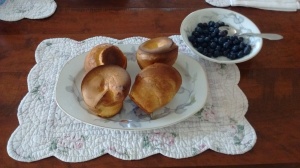 By June of 1948, Dr. John Welles still hadn’t overcome his experiences during World War II. The haunting memories were more than he bargained for. Further gnawing at his conscience was the fact that his service had been quite brief. The worst part, though, was the secret John brought home from the war.

In his efforts to bury the painful truth of what took place in France, John became increasingly distanced from his family and friends. They were patient and loving in return, waiting for John to open up on his own terms. All except his Aunt Prudence.

Prudence had never been one to sit back and wait for things to happen. She always made her own outcome to her satisfaction, and this was exactly what she intended to do with John. Unfortunately, her well-meaning endeavors didn’t produce the results she had hoped for. She argued with her nephew until John simply shut down. Still, Prudence never backed off where he was concerned.

Into the middle of this family struggle stepped Lucia, Prudence’s sassy cook since the days of John’s boyhood. She knew her employer turned close friend had John’s best interests at heart, but sometimes Prudence’s tactics were too harsh, especially for a man still reeling from the effects of war.

One morning, over a breakfast of popovers, Lucia offered the sage advice that helped John make the first positive decision in his life since returning from Europe. Prudence hated to admit that her cook was right, but she didn’t press the issue.

The following recipe for popovers is the one I had in mind when writing the above-mentioned scene for my novel, The Secrets of Dr. John Welles. The recipe has been in my mother’s recipe box since her high school home economics days. Popovers are incredibly simple to make, and they taste delicious fresh from the oven with butter.

Thoroughly butter 5 – 9 custard cups. Mix all ingredients with a beater until smooth. Do not overbeat the batter or the volume will be reduced.

Fill the greased custard cups half full. Bake for 40 minutes. Resist the urge to peak or the popovers may fall. Check after 40 minutes. The popovers should be golden brown.