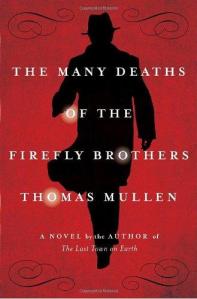 Have you ever read a book so good that you wanted to rush through it because you couldn’t wait to see how it ended only to stop the last three to five pages before the end because you suspected that it was about to finish on a heartbreaking, bittersweet note?  I have a feeling The Many Deaths of the Firefly Brothers is going to haunt me for some time, but that’s all right because while I’ve read many good books lately, it’s been a while since I had one that stayed with me as this book did.

I suppose the reason this book affected me is that I couldn’t help looking at it from the romantic’s perspective.  The story is quite surreal, not fantasy and not science fiction, but written in such a way that I could completely suspend belief about what took place to the point that the story totally engrossed me.  Not to mention that Thomas Mullen is a natural born storyteller.

Mr. Mullen seamlessly weaves history from the Great Depression and the 1920s and ‘30s into his novel.  He also intersperses the stories with mention of famous gangsters like Bonnie and Clyde, Baby Face Nelson, John Dillinger, Machine Gun Kelly, Pretty Boy Floyd, and the Barker Gang.  One can’t help getting caught up in daring bank robberies, wild police chases, the brokenness of the Hoovervilles, and the tenacity of the G-Men.

But then Mr. Mullen blurs the lines ever so slightly when these gangsters, along with his own fictional Firefly Brothers, earn legions of fans across the country for sticking it to the banks that foreclosed on property of poor, struggling farmers.  True, their craft was an art, but they were also murderers living high on the hog whose charity extended to them first and their families second.  Past that, most of what they did was pure myth.

So how does one separate fact from fiction, truth from lies, and good from evil when the intimidating fingers of governmental control was more than implied in this somewhat prophetic tale?  Factor in the development of what became the FBI under J. Edgar Hoover, and it was like I read headlines from today regarding the American government and the NSA.  Perhaps we really are doomed to repeat history when we forget it.

And if you think I’m exaggerating the prophetic nature of the story, consider the following passage:

Part of the Bureau’s job, the Director had always explained, was to dictate reality—to investigate reality, fully understand it, and then, under the aegis of Mr. Hoover’s vigilant public persona, explain that reality to a public cowed by the depression and frightened by stories of gangsters and increasing lawlessness.  It was the Bureau’s job to reassure people that these shockingly hard times were merely speed bumps along the shared path to prosperity, and not a sign that the nation was spiraling into anarchy and madness.

I believe today we call that fake news.  What struck me about this passage was that even if J. Edgar Hoover never said these exact words or acted this way, even in 2010 when the novel was published, Mr. Mullen had understanding of where America was headed.  No doubt based on where we had already been.

At first I thought the novel promoted a lack of hope and something to believe in, but with further reading, I realized it toggled between this and hoping against hope to believe in the impossible as a means of survival.  Such amazing insight into the human condition and an unexpected source of inspiration from a novel is rare.  Another pleasant surprise was the concept of forgiveness, for others and for self, subtly entwined into the tale.

Long before I finished reading, I realized I was experiencing what I could only call a Literary Stockholm Syndrome in which I wanted the bad guys to succeed in their struggle against failure (whether real or perceived), to reconnect with their true loves, and escape.  I mentally pleaded with them to find their women and just disappear.  Nothing they were doing would actually work in the end, it was no longer about seeking justice, and they would most likely end up dead.

I’ve mentioned before how I wished an author would have finished a novel on a clearer, more positive note or would consider writing a sequel to undo the heartbreak and let me know beyond a shadow of a doubt that a happy ending took place (Is It Ever Too Late?).  I mulled these thoughts over again at the end of The Many Deaths of the Firefly Brothers.  Until Thomas Mullen tells me otherwise, I’ll wish for the impossible and believe in a favorable outcome.