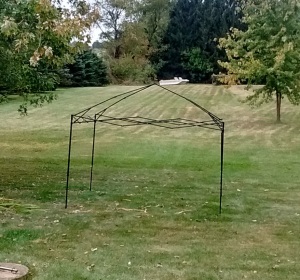 Less than twenty-four hours to Sukkot, and I have no sukkah.  What I have is a cabana frame with no way to attach the Chinese silver grass (and no promise the frame will support the weight) and no way to affix the sheets I plan on using as curtains.  Oh, I also have a mother who says, “You know I like things elaborate,” and “I just ran out of time to make the curtains.”  Funny how we’re back to using the sheets I suggested in the first place and she dismissed as hillbilly.

This is round two of building a sukkah for the Gibson Family.  You’ll recall last year’s efforts (Learning Curve) were redneck at best.  We’ve come a long way since then, and we’ve learned a few things.  Such as sukkahs need four walls and branches still attached to the tree don’t count.  Still, we did our best, and I truly believe Adonai was honored by our efforts.  This year, I’m thinking He might be grading on a tougher curve, and we’re getting points checked off for lack of preparedness.

You see, I had this all planned out on Monday when Mom and I went to buy the PVC pipe, three-way elbows, and the shower curtain clips.  We were on our way to Home Depot and ended up everywhere except Home Depot.  I could have had this finished Monday evening and been peacefully admiring my sukkah in anticipation of sundown Wednesday.  Instead, I’m anticipating watching my mother weave paracord around the top of the frame (at minus five-foot-short, I have no idea how she’s going to reach the top of the ten-foot-plus, peaked cabana frame) probably while standing on a step ladder (I’m not sure we own one anymore) placed on uneven ground.  I’m having flashbacks to Mom and Dad fighting over the set-up of…well, just about everything.

And the grasses still need cut down.  With a reciprocating saw.  I know we own one of those, but I have absolutely no idea what it looks like or where it is.  Dad is supposed to help me with this, but then I wonder who will watch Mom while she’s weaving paracord on a ladder?  This is not going well.  At least Dad should be sufficiently occupied cutting grasses so as not to pick a fight with Mom.  And nobody better pick a fight with me because I have a headache already.  Is it too early in the day for a glass of bourbon?

Here’s the kicker:  we have until sundown this evening to complete this, except Mom wants to eats dinner in the sukkah as a family.  My husband, William, leaves for work at 3:30 PM.  So, we have roughly four and a half hours to get this thing ready.  I’m thinking we should have completed the sukkah today, enjoyed some coffee, tea, and cake in it, and then tomorrow when husband’s vacation starts, enjoy dinner as a family.  Am I the only person who sees this spiraling out of control?

Don’t even get me started on dinner.  Mom asked what I planned on making for the first evening.  This is code for “I’m buying the cabana frame, so you make dinner.”  Not a problem at all.  Really.  I figured we’d have the sukkah up by Monday evening anyhow, so I’d be free to prepare food.  Then she texts me with a picture of the marinara sauce she’s making for dinner.  I hadn’t even suggested a menu, and already she nixed it.  Again, not a problem.  We like marinara over spaghetti, and I have back-up sauce in case our teenager snarls his nose at it.

It’s anyone’s guess how this is going to go off.  I know there are a few details we still aren’t going to get right, but like life in general, Adonai gives us time to grow.  It’s anyone’s guess whether it’s His voice or mother’s in my head saying, “Have a little faith.” 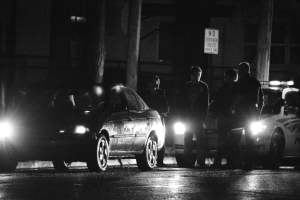 Drake wished he had taken his Mom’s suggestion to wear a warmer coat. He didn’t know how long they’d be standing here while the cop gave them sobriety tests which they all ended up failing spectacularly. Devon and Tony couldn’t quit shivering beside him, and he wondered if it was from cold or fear.

He didn’t know how the cop couldn’t be cold in short sleeves. This guy wasn’t even shivering, no goosebumps on his brawny arms. Just cool and collected, so polite as he questioned the three of them about where they were coming from, what they had been doing. He sounded like Drake’s dad discussing his job at the dinner table in an even voice without much inflection, like the buddy he ran into earlier at the convenience store when he purchased that twelve pack of beer. Not at all condescending.

With hands jammed into his pockets, shoulders rounded, Drake answered yes, sir, and no, sir, with the thin veneer of false compliance barely concealing the resentment in his voice, the scowl on his face. He should be back at the party, but that idiot Tony had volunteered them to make a beer run. The party where the girl with the long mane of thick, black hair had stood beside him all night, bumping his arm every time she sipped her drink. He had wanted to rake his fingers through her hair, pull it back into a ponytail, and give it a gentle tug. The memory made him smile, and he snorted a laugh through his nose. Tony elbowed him in the side and hissed, “Quit it, man. You’re gonna piss this guy off.”

But his resentment wasn’t directed toward the cop who pulled them over for erratic driving. He just didn’t like the guilt lodged between his shoulders like an ax blade. Guilt ruined fun, and that’s all they’d been doing. Having fun. You want something to make you feel like you’ve done a good job, something to talk about at roll call tomorrow? Go check out what’s happening three blocks down, two blocks over. That’s the place to make the real bust. The place they just came from. The house where the dark-haired girl who nodded and smiled when Drake refused the joint was probably already dancing with someone else. The house with white lines on the glass coffee table.

Still, he can’t blame the cop for doing his job. Of course, he could have chosen to be a furniture mover based on the size of his biceps. One of those guys who lifts refrigerators and wardrobes by himself, strapped to his back, and not a single grunt as he walked up or down stairs. Weren’t cops supposed to be soft in the middle from driving around all day, eating doughnuts? Drake should be able to outrun this guy in his black, laced up boots that looked slightly military and weren’t meant for running like the cross trainers Drake wore. He could sprint away from this cop like a cheetah running from a wombat. Out distance him in nothing flat.

But then the cheetah would grow tired after the initial burst of speed. He would hear the steady beat of the wombat’s boots behind him closing the distance, each methodical step brining the wombat closer to the spent cheetah. Like an endurance runner. Drake shuddered, and the bright idea to run was squashed like a lightning bug in the hands of a devious five year-old. Yeah, this cop probably ran marathons.

Drake shook his head because he knew they’d messed up and were in serious, serious trouble. Something cold and wet hit his face; something more than mist but less than rain. The damp seeped into his clothes, and regret drew his chin down to his chest. Drake’s eyes stung and he wasn’t having fun anymore. He wanted to go home. He wanted the lead weight on his diaphragm that made it hard to breathe to disappear. His mouth tasted sour.

The soft glow of headlights fuzzed by the condensation reminded him of the cotton balls his mother used to remove her makeup. His mother. Drake wondered if the officer would let him call his mother so she could bring him a warmer coat.

Thank you to HBSmithPhotography for the picture.