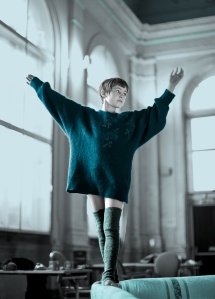 The picture of the little girl dancing on the couch caught my eye as I was playing on Pinterest one day. A short story flooded my head, and I simply had to open a Word document to get it all down. What followed has been revised and researched several times until I was completely happy with the story. Of course, I’m a writer, so even after I post this, I’ll probably find something I would have changed. We all know if I did that, nothing would ever be posted. So, grab a glass of chianti and a plate of your favorite pasta, tuck your napkin into your collar (don’t splash the screen), and enjoy some “Italian Cooking.”

UPDATE: This story has been edited and pasted into the body of the post for ease of reading. Enjoy!

Dana danced on every piece of furniture in my apartment. I poured a glass of wine and watched her.

“Does your mother let you do that at home?”

“Yes.” Her smile possessed the sweetness of a girl on the cusp of her teen years.

“Are you hungry? I could make you something to eat.”

I pushed up from the table and walked around the butcher block island. What would a professional Viking refrigerator hold that a child might like? This baby had been purchased to safeguard exquisite cheeses and Italian white truffles. It cost more than Annalise’s piece of crap car. I felt guilty just thinking this.

“Well, there’s some focaccia with ricotta or grilled salmon.”

Dana wrinkled her nose and pirouetted on the coffee table. One leg warmer crept downward.

Her laughter sparkled. I’m pretty sure it was at my expense.

“Look in the cupboards.”

I remembered a mother at my restaurant ordering spaghetti for her kid. Something told me to offer pasta to Dana.

“How about penne with tomato and basil?”

She cocked her head to the side. It made her look like a sparrow.

She stood right beside me as I prepared the food, eyes narrowed in curiosity.

One delicate hand reached out to snag a piece of basil off the cutting board. Her fingers were long and lithe, just like her legs. I could see why Annalise had her in ballet. I suddenly wanted to press those fingers between both of my hands.

“Rub the leaf between your palms and sniff.”

“Very good. Cinnamon basil is my favorite. I use it in everything.”

We ate in the living room propped up against gigantic pillows. I have to admit I had my white leather couch in mind when I suggested we sit cross-legged on the floor to eat.

“I like this place. I’ve never been in a loft. It must be nice to live here.”

The bachelor in me reared up wondering what to make of her comment. She didn’t give me the chance to contemplate an answer, if one was even required.

“Gino? Why did you and Mom never marry?”

I ran my hand through my hair to stall.

“Why do wear your hair long like a girl?”

She did that quite often, bounced from subject to subject quicker than a basketball dribbled by LeBron. I made a noise in my throat and scratched the stubble on my chin to buy some time.

“That’s why I never married your mom. I hate to shave.”

Dana chewed her pasta thoughtfully, her eyes wandering over the ceiling as she decided whether or not she liked my answer. I needed to diffuse the situation.

“Why do you wear your hair short like a boy?”

Snorted laughter let me know I scored some points. Her jack-o-lantern grin returned. I should probably hold off buying that new oven for the restaurant. The cost of braces might be in my near future.

I let her stay up later than Annalise allowed. I wasn’t trying to be the good guy or anything, I just lost myself in an issue of Saveur. There was a nice article about my restaurant and another on wine.

Dana stood behind me not saying anything. One dainty hand held my head still as she used the other to pull a brush through my hair. A ponytail secured below the crown was fastened with a rubber band. I winced as she twisted it into place.

“You’re putting it all in a ponytail?”

“You’d really look like a girl it I left some down. It’ll look way cooler like this.”

I prayed that was the end of my beautification. Horror stories about fathers submitting to makeup and tea parties were part of what kept me single. Surely Dana was too old for that stuff anyhow.

Around eleven thirty I tucked her in. The idea of sleeping on a futon on the balcony wasn’t enough to keep her homesickness at bay. Her eyes looked liquid in the moonlight.

“There’s no bed inside for me.”

“There could be. In that corner you like by the bookshelves and plants. Whatever kind of bed you think would look good. I’d even let you paint the walls if you want.”

“The walls are brick.”

“Is cinnamon basil a color?”

“Only if it’s made by Martha Stewart.” Then for no reason I could explain: “Would you like to call me Dad?”

I held the long fingers of her hand for several minutes. They were a smaller version of my own.

“Would you like me to teach you how to make biscotti tomorrow?”