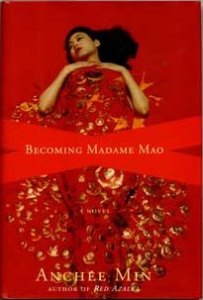 I have never wanted to distance myself from a book as much as I have Anchee Min’s Becoming Madame Mao. I have never wanted a book to end as much as this truth-is-stranger-than-fiction novel documenting the transition of Yunhe to Lan Ping to Madame Mao Jiang Ching. Anchee Min’s bio on the jacket flap states that she “has a personal connection to Madame Mao.” As a young woman, Min was recruited by a talent scout for Madame Mao’s Shanghai Film Studio. I wondered how her close proximity to Madame Mao shaped the story and which parts might have been revealed confidences and which were romanticized imaginings. In either case, there is absolutely nothing about Madame Mao to admire.

The novel initially drew me in with a prologue told in points of view alternating between a third person omniscient narrator and the young woman who would become Madame Mao. The dual storytelling was a refreshing and intelligent approach to revealing the tale as the reader is given an outsider’s view to Madame Mao’s story and then drawn into her perspective complete with emotions and desires, inner details and thoughts. And that is where the good in this book ends.

The woman who became Madame Mao did indeed have a horrible beginning to her life. It marred her existence with overwhelming amounts of insecurity that would haunt her forever. She combatted her fears by throwing herself into her one passion: acting. This allowed her to constantly transform herself into who she needed to be to survive. As heroic as this sounds, Madame Mao never learned grace or forgiveness. Instead, she used China as her stage, cast herself as the leading lady, treated the people of China as mere props, and was nothing more than a lying manipulator who destroyed anyone in her way.

Revenge against people she disliked ended in imprisonment and murder. Actors and politicians who snubbed her, regardless how of long ago the supposed offense took place, found themselves on Madame Mao’s hit list. Jealousy for any woman in a stable marriage, especially if the woman’s husband was close to Mao Tse Tung, poisoned her mind and her actions. She was evil personified, and I cannot feel sorry for her.

The novel has Madame Mao claiming she conducted herself as she did for love. Her twisted version of love was to insert herself in a situation where her affection quickly faded in the face of her true desire to achieve power and rule. Another claim was that she was helpless to act any other way than how she did, and she points the finger back at Mao when she said, “I was Chairman Mao’s dog. I bit whomever he asked me to bite.” She only did this to maintain his favor in the hopes of ruling after his death, and I believe that the cowardly act of denying responsibility for her own actions makes her even more despicable.

As troubling as the history of this psychotic, vindictive woman is, what I find more disturbing is the fact that the history appears to be repeating itself in America. And it’s not even our history. The battle for control of media outlets is one such example. The novel has Madame Mao stating “I feel the power of the media. The way it washes and bleaches minds.” All other forms of media were illegal except her operas, ballets, and films which pushed Mao’s Communist agenda.

America hasn’t reached the level where a simple family feud between a child and a step-parent can end in public humiliation, imprisonment, torture, and death, but every day the news and entertainers denounce major political figures based on rumor and imagination. I fear the “get evidence and produce witnesses” order of Madame Mao’s day is not far off.

Another familiar tactic I recognize was when Madame Mao, together with her husband, upended China by gaining control of the students. Their young impressionable minds were subject to the manipulation, and the Maos made no secret of the fact that they intended to get the students on their side with rallies and speeches meant to whip them into a frenzy of action.

Of course, this begs the question of action toward what end? When looking for understanding and clarification, Marshal Tan Zhen-lin asked Mao, “What is the Cultural Revolution if its goal is to abolish order? Why torture the founding fathers of the republic? What’s the point in creating factions in the army? To tear down the country? Make me get it, Chairman.” Mao responded with a tirade about not allowing anyone to stop the Cultural Revolution, fully supporting the Red Guards, and endorsing chaos and violence as a means of achieving some arbitrary goal. The question of what’s the point, what’s the purpose was left unanswered.

The portion of the reign of terror perpetrated by Madame Mao made her an empress ruling on the ashes of China and the Chinese people. She was at the forefront of the destruction from within. Twenty million lost their lives to this madness. Her place beside the likes of Mao, Hitler, and Stalin is forever secured in history.