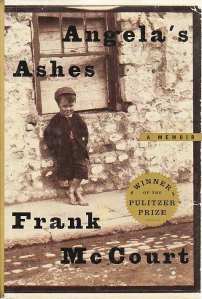 I recently read Angela’s Ashes by Frank McCourt.  If you follow me on Goodreads and you’ve read the book, you might think I’m rather rigid in my assessment of the memoir.  I’ve read other fiction and non-fiction accounts of the Great Depression in America as well as extremely poor people in Ireland, Appalachia, and other such places, and I must say that for a Pulitzer Prize winning memoir, Angela’s Ashes did not strike me as exceptional in any way.

I’m not sure why the book is titled as it is when the story is predominantly about McCourt’s experiences as a child.  His parents’ courtship and marriage prior to his arrival was necessary to set the stage for what the entire family would endure due to his father’s alcoholism and eventual abandonment, but again, the bulk of what one reads focuses on young Frank.

The prose is pleasant (riddled with Irish slang, sayings, and swear words galore), but nothing poetic or beautifully descriptive.  Sometimes dialog is properly placed between quotes and employs commas, periods, or question marks where necessary, and other times it’s buried in long paragraphs of run-on sentences.

One saving grace from all the depressing tales McCourt relays is the hilarity of the situations he’s writing about.  The thing is, the humor is derived from circumstances that are simultaneously horrific.  Yet the reader has to laugh because the truth is almost unbelievable.  Sadly, some of these dreadful circumstances include the way adults in the story treat McCourt, his siblings, and friends.

It’s unacceptable when adults express the depth of frustration, prejudice, and ignorance-born hatred toward each other that McCourt conveys, but children should never have to suffer at this level.  Educators, employers, priests, nuns, relatives, and hospital administration inflict verbal and physical damage on par with child abuse.  It’s a wonder any child living in these conditions turned out normal.

Near the end of the book, Angela McCourt finally takes the self-sacrificing initiative to do something for her children’s welfare.  Prior to that she tolerates her alcoholic husband’s actions to the extreme detriment of her family by keeping her abuser front and center in her life.  Perhaps it was the era in which the story takes place, perhaps it’s that divorce still carried the stigma of shame back then, perhaps it’s that Angela suffered from some type of battered-woman syndrome (hers being in the form of neglect beyond all reason), but because she refused to rid their lives of her worthless husband’s presence, they underwent shame to an equal degree anyhow.

There comes a point in the book when, in my opinion, McCourt rushes through years thirteen to nineteen because to tell it in any more detail would read as more of the same depressing ground already covered over and over and over.  Things turn around for young Frank ever so slightly; he hops a boat to America, end of story.

I’d like to say that Angela’s Ashes is one of those books that just shouldn’t be missed, but I can’t.  I’m not sorry I read it, but if asked whether or not it is a worthy read, I’ll probably shrug my shoulders, suggest the reader try it, and make up his or her own mind. 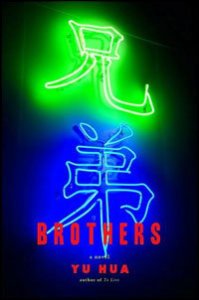 What I loved about Brothers by Yu Hua is that within the pages of one book I found a story that made me laugh and cry over and over. The tale is both horrifyingly dark and twisted, but with seamless transition, Yu Hua writes some of the best comic scenes I’ve ever read. Life in America for the past eight years has made it possible to understand the absurdities about which Yu Hua writes, and for this reason, they are believable.

The story of Baldy Li, one of the most memorable characters I’ve encountered in fiction, and his brother, Song Gang, opens right before Mao’s Cultural Revolution. Scenes in which neighbors are unified in a common cause or belief and turned into enemies the very next day are chillingly similar to what is happening in the world today. When Yu Hua writes about Li Lan’s, Baldy Li’s, and Song Gang’s grief over the death of Song Fanping, I thought my heart would rip in two so great was their anguish.

The two definitions of stupidity (knowing the truth, seeing the truth, but still believing the lies, and doing the same thing over and over and expecting a different result) often came to mind while I read Brothers. I’m watching the premise of the story take place right in front of my eyes as the youth of America believe they can make certain political systems work in their generation even though overwhelming evidence of failure exists in other countries. I have to wonder if they’ve forgotten the past or are purposely not being taught. In either case, we’ll all be doomed for it.

The story is engaging based on the time period and cultural differences. Yet the prose is so simple that I have to wonder if this is due to the translation from Chinese to English or if the author chose to keep his words plain. In either case, his writing style works. Another thing I noticed while reading this translation was the repetitive nature of the writing. I’ve only encountered this in one other translation, Haruki Murakami’s 1Q84, and I wonder if this is a style particular to Asian writers. I find it lends emphasis to details and storylines.

Yu Hua broke the rules of writing brilliantly by not following plotting formulas. Two ways in which he did this was by the introduction of a new character and storylines in the last one third of the book. Not surprisingly, the pacing of the novel was not interrupted, and as a reader I wasn’t jarred out of the book. Obviously, Yu Hua writes for intelligent readers, and in this way, it reminded me of Dumas’s The Count of Monte Cristo with its large cast of characters, interwoven storylines, and backstory. In both cases, readers willing to stay with the book to the end will absolutely not be disappointed.

I know the book was written as a criticism on political systems and to show all the evil and craziness that stems from them. I found my interest focused on the relationships of the characters enduring life under the various political systems and how their relationships were further affected by their personalities which dictated how they reacted to circumstances and each other.  I came to the conclusion that all one can probably do in such a situation is be kind, work hard, and do no harm.

Despite the depth of the tale Brothers presented, as I said there were some hilarious moments including a chicken search party, Yanker Brand underwear, and actual blind men drawing blind conclusions. But again, that’s part of Yu Hua’s ability to make a reader laugh while getting his point across. The best line though was probably Yanker Yu explaining politics to Popsicle Wang when he said, “…comfortable circumstances breed freethinking, which is why the rich love politics.” I laughed aloud as I shuddered thinking how stirred up the politicians are keeping the world.

Fellow author Mark Tilbury tossed out a question that is often on my mind as a reader and writer. In his post, Have Books Lost Something With Their Lack of Description, Mark asks us our opinion on today’s style of writing.

We’ve all encountered the “massive blocks of descriptive prose” to which Mark refers. Sometimes they truly are too long, too irrelevant to the story, too purple, etc., etc. I have skimmed such passages in search of the storyline and/or dialog that would put me back in the story.

However, because we’re all friends and adults here, I’m going to say that I disagree with the notion that description is informative but unnecessary. I hear all the time that the reader shouldn’t be led around by the nose; he/she should be given the opportunity to imagine the story. As an avid reader, I can honestly say that I have never felt this way about descriptive writing. On the contrary, my imagination was enhanced and grew because of the description I read including that written about journeys and the passage of time.

The key is that writers need to learn the perfect balance between too much and enough, the fine line between well-written, well-placed prose versus that which is encumbering, unnecessary. This seems like a daunting task, but I believe it can be achieved by not reducing writing to a formulaic method. In doing so, authors will elevate writing back to the level of artistic recognition it deserves.

I have never read Stephen King’s book, On Writing, but I would have to agree that abundant description about a character’s acne would be tedious. If that acne-plagued character traveled by canal boat from Pennsylvania to Ohio, then I would love the benefit of description. I would look forward to a word picture painted by the author that draws me in to the sounds, smells, and sights of the trip. It would be a perfect place to introduce traveling companions, a time for the protagonist to reflect, an opportunity to build the tension that so deliciously moves the story forward.

Even if none of the above-mentioned suggestions occur, as a reader I would still enjoy the mental images of traveling with the character, and I believe an important part of the writing would be lost if these well-written descriptions didn’t occur. As Mark mentioned in his post, they are an art form unto themselves. Like all art, value thereof still resides in the eye of the beholder, or in this case, the reader. Well-written description can exist purely for the sake of entertainment.

I have to wonder if writing hasn’t gone the way of food preparation in that we no longer know how to linger over a book in the same way that we forego multiple course meals and choose to patronize fast-food restaurants. I read because I enjoy the slower pace, and while there is a place in my

reading diet for the occasional literary Big Mac, more often than not, I opt for the balanced meal of description, dialog, prose, and narrative.

Now I don’t want to start a fight with screenwriters because I truly do appreciate their craft. However, using what worked in an action-packed movie and applying it to writing has resulted in fast-paced novels written with the singular hope of being turned into a movie. This has diminished writing for some of us. This influence has led to the removal of poetry and painting (mental images) from writing resulting in flat, hollows stories. Let movies be movies, appreciate them for all that they are; and let books be books, treasures not to be rushed through.